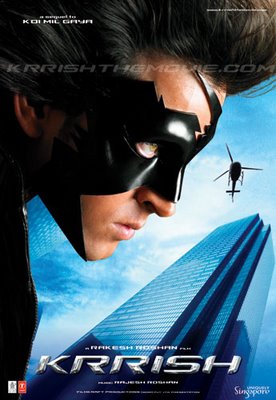 If your whistle was wet by the NYT article from last month about the new Bollywood superhero movie Krrish, you'll enjoy even more this review by media theorist and fanboy Henry Jenkins.

Much like the original Superman, he covers vast distances through long leaps but doesn't actually have the ability to fly. He can scale a mountain peak as if it were a series of stepping stones. He can run faster than the local horses. He can reach into the river and yank out a fish with his bare hands. And he can speak with the animals and get them to do his bidding. And, in several sequences, he demonstrates his superiority, Gandhi style, by withstanding enormous physical and emotional abuse without resorting to violence.

Sadly, it doesn't appear to be playing in California. Yet.

But trailers and song clips are available at the official movie website.
Posted by cjereneta at 12:36 PM

Hmmm. How to spend my extra time in Pittsburgh in two week? The Andy Warhol museum or the multiplex?