This is a patent office, Albert. Your job is to transform written patent applications into clear and precise language, and to study applications and pick out the new ideas of an invention. These are the priorities. Where does it say that your priorities are rewriting the rules of the Universe, unifying space and time, unifying radiation and matter, or demonstrating the existence of atoms?

Brought to you by Peter Norvig, he of the Gettysburg Address PowerPoint Presentation fame.
Posted by Tim at 12:53 PM 1 comment:

Before the name Harriet Miers fades from your memory, take a moment to savor the eyeliner in this caricature.
Posted by Christa at 9:15 PM No comments:

Across Laos on One Wheel

My storytelling colleague, Megumi, specializes in Japanese and Japanese-American stories. She once told me she was married to a man who's hobby was Mountain Unicycling. Like Mountain biking, but with one wheel.

Now she, her husband, and her 13 year old son are taking a trip to Laos.

And they're bringing their unicycles.
Posted by Tim at 7:46 AM No comments:

Kickass animated music video of a song by The Real Tuesday Weld,
itself a resample from a Mills Brothers track.
Posted by cjereneta at 3:48 PM No comments:

If you've been having trouble following the Valerie Plame ins and outs of who's a source and who's going to be indicted and for what, Adam Felber ("Wait, Wait... Don't Tell Me") puts it in a context that even a 6th grader could understand:

See, someone told Judy that Valerie (you know, Joe’s Valerie?) worked for the CIA. At first everyone was all, like, it’s gotta be Scooter who said it, or maybe Karl or even Dick, but Judy wasn’t telling and she got in like really big trouble for that, you know? Pat got REALLY angry about it and sent Judy away....

Feeling the news at you

Did you know that you have more nerve endings in your stomach than in your head? Look it up. Now, somebody's gonna say `I did look that up and it's wrong'. Well, Mister, that's because you looked it up in a book. Next time, try looking it up in your gut. I did. And my gut tells me that's how our nervous system works.
Posted by Deirdre at 1:41 PM 1 comment:

WikiPedia: Made-up words in The Simpsons

Gazillionaire blogger/NBA owner/blogger Mark Cuban suggests that the video iPod --and specifically, the $1.99 download via iTunes-- will turn the revenue model for network TV on its head.

Even the worst primetime television shows have on ABC, CBS, NBC and Fox get millions of viewers. If the network can convert a couple percentage points of viewers into downloaders, it can turn into decent money. 2 bucks a pop. 50k downloads per eps. Thats more money than a hit reality show like Survivor earns in syndication.


He also suggests that this revenue stream will make up for the loss of revenue as TiVo owners block out commercials and drive down the cost of advertising.
Posted by Tim at 8:42 AM No comments:

Wishing i could watch this clip (NBC's video is Internet Explorer 6-only), but Dana Milbank's description might be funnier than the reality.

When Lauer asked if Bush, after a slow response to Katrina, was "trying to get a second chance to make a good first impression," Bush blinked 24 times in his answer. When asked why Gulf Coast residents would have to pay back funds but Iraqis would not, Bush blinked 23 times and hitched his trousers up by the belt.

Posted by cjereneta at 2:44 PM No comments: 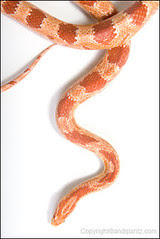 Slither
Originally uploaded by andipantz.
"We have a snake at school and his name is Picnic.

And the story is: when they got it, I wasn't there. It was about as
big as a pencil.
It used to be close to its tail and they bring it to church one day
and it went into Lloyd's shirt and it came out his sleeve. Lloyd has a
daughter and when she was a baby she tried to say "Pink Snake" and
Lloyd thought she said "Picnic" so he named him that because it was a
funny name.

He stays there when school is not open.

He is a corn snake.

He has a bowl of water and a piece of log, I think when he is tired.
And this is the first time the corn snake has ever been to Lloyd's
house. Lloyd is a teacher at my new school-- I already started it.

And also when I was not there they had a kitty that brought in
presents-- not like Santa's presents-- one day it brought in a mouse.
Its claws were too sharp and the little mousie died and they buried
it. And they have the skeleton of the mouse."
Posted by Tim at 7:42 PM No comments:

Finding decent blog postings and smart op/ed pieces on state issues is more difficult than National ones, I think.
How many can we find before November ?

Link goes to UC Berkeley's Institute of Governmental Studies, for background on the ballot measures.

For finding the snappy blog entries, you're on your own.
Posted by Tim at 4:11 PM No comments:

The Best Gizmo You Don't Have

Follow the link to Mark Morford's column this past Friday. Practically a love letter to apple's isight camera and ichat.
Posted by cjereneta at 9:41 PM 2 comments:

I stopped reading the Real Estate pages about a month after we moved in. I never liked the listings anyway. I always read the trends, the how-tos, the market predictions. I even read Carol Lloyd ("Surreal Estate" in the Chron).

Now I'm going to have Nightmares. Even though we didn't waive any inspections.
Posted by Tim at 11:00 PM No comments:

(from Barry's Arts Blog and Update)

Barry Hessenius, former California Arts Council Director (back when it had actual funding from the state budget), used to send out weekly emails from his office. I was never impressed with his weekly emails, and so when I heard he was starting a blog, I shrugged. BUT:

"The Hessenius Group," a take-off on The McLaughlin Group television show, is a brilliant use of his blog. He assembles a team of top mover, shakers, and thinkers in arts administration, and fires off questions. Being online, it's not as fiery or as spirited as McLaughlin's show, but still, it's like being set down at an arts administration conference post keynote hallway conversation.

Okay, you really have to be interested in arts policy and nonprofit management to enjoy this... but the model is impressive. Well, after one episode, anyway.

This panel discusses the effect of a possible repeal of the Estate tax on the arts world.

And more interesting is the question: "ARE we seeing the precipitous decline in the presentation and support for alternative arts performances?"

In addition to suggesting that the term alternative means a zillion different things, the panelists suggest several factors, all of which I find fascinating:
1) the cultural conservatism of the last 20 years has shrank the audience for art;
2) the economics of art, especially of the last 20 years, is making it harder to produce art;
3) co-option of edgy art by for-profit which is actually making edgy material a mainstream source of revenue (i.e. HBO, Sundance) in broadcast media;
4) the arts funders have neglected the distribution channels of niche art forms
5) the Web is providing a new distribution channel and outlet for alternative voices and providing direct competition with previous forms of art-- not only for distribution-- but competing with the "values" of live art ("Digital media can be expected to challenge increasingly each of the special powers and values of live art (sensory immediacy, stagecraft, the communal experience, etc.) increasingly."
Posted by Tim at 10:29 PM No comments:

I was suffering a kind of Chinese water torture today as the Thomas the Tank Engine And Friends theme song sloshed around my head like a washing machine stuck on 'rinse'. Hoping to purge the earworm by indulging it, I googled one of the offending phrases and discovered someone else blogging about being driving crazy by that same song. Sub sole nihil nove est.

The power of the virus is mighty:

They're two, they're four, they're six, they're eight.
Shunting cars and hauling freight.
Red and green and brown and blue,
They're the Really Useful crew!
All with different roles to play,
'round Tidmouth sheds or far away.
Down the hills and 'round the bend,
Thomas and his friends!

Posted by Deirdre at 2:27 PM No comments:

This is sooo 2003. But for some reason, this Honda commercial popped into my mind today, so I thought I'd check to see if it was still around.

Yup.
By the way, it's two continuous shots. Can you find the cut?
Posted by Tim at 11:00 PM No comments:

Is the W robot malfunctioning? What is happening here?

Wal-Mart's Commitment to Our Communities

Blogger Bill in Portland ME recounts a high school teacher, Selina Jarvis, who:

assigned her senior civics and economics class "to take photographs to illustrate their rights in the Bill of Rights," she says. One student "had taken a photo of George Bush out of a magazine and tacked the picture to a wall with a red thumb tack through his head. ..."

According to Jarvis, the student, ... was just doing his assignment, illustrating the right to dissent.

Quick summary by Gina Kolata, author of FLU, the scary book I read about the 1918 epidemic.

"This is huge, huge, huge," said John Oxford, a professor of virology at London Hospital Medical College, who was not part of the research team. "It's a huge breakthrough to be able to put a searchlight on a virus that killed 50 million people. I can't think of anything bigger that's happened in virology for many years."

Posted by cjereneta at 10:38 AM No comments:

From the Boston Globe:

The FBI's counterterrorism unit has launched a broad investigation of US-based theft rings after discovering that some of the vehicles used in deadly car bombings in Iraq...were probably stolen in the United States.

Posted by cjereneta at 11:57 AM No comments: