What's it worth to reduce my spending?

Hm... This calculator is thought-provoking. If only I could exercise better discipline in depositing the fruits of my frugality into high-return investments.
Posted by Deirdre at 3:38 PM No comments:

Shelter mag for the downwardly mobile

From "Breed Em and Weep", an amusing post plus comments:

I want to know how other people live anachronistic lives in their old houses, i.e., how they can bear to look at their yucky, buckling Ikea furniture in the same space as old pine floors that deserve to be refinished and loved for another 100 years. 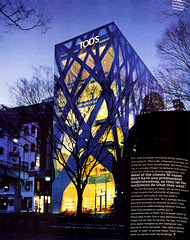 ToyoIto_04
Originally uploaded by AQUA_.
As you walk up Center Street from BART to the campus, you pass a Paper Plus Outlet, then lots of restaurants and cafes-- it's one block from Shattuck to the West Gate of UC Berkeley. But really, it's half a pedestrian entrance. The other side of the street is a Bank of America and parking lot, and UC's printing warehouse.

But not for long. Plans are afoot to put in a hotel and conference center where B of A is... and the warehouse will be home to the Berkeley Art Museum/Pacific Film Archive.

Today they announced the architect, Toyo Ito of Japan.

So I went and looked to see what might be in store for downtown Berkeley. Check out these links at Flickr (single photos don't do architecture justice, and Flickr is great and grouping pics together):
Sendai Mediatheque
TODs Omotesando Building (pictured above)


Cool. Some of his early stuff looks a little too modern (there's a Yokohama day care facility that calls to mind an airport lobby), but I'll say this: a cutting edge building is certainly going to liven up downtown.
Plus, as a bonus, the Berkeley Daily Planet is so going to hate whatever the final product looks like.
Posted by Tim at 12:36 PM No comments: 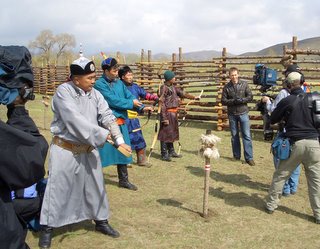 Here's Phil Keoghan preparing for his St. Sebastian moment outside Ulaan Baatar. Last night's episode brought back some great memories for me. Getting our truck stuck in the mud, riding small horses at a pounding trot, getting cloudy-looking water out of a freezing river, watching cheerleaders shoot flaming arrows into a kerosene-filled urn. Wait. Maybe not that last thing. Tim and I suspect that an falconry challenge was probably edited out of the final version.

Lots o'teams were worth watching. I hope the coal miners stay in it just so Mary can keep shooting David that withering glance. The single moms seem like they're barely hanging on, but I hope they do. Male models: you bore me silly. Peter and Sarah are scaring me a bit. Peter with his cold Teutonic efficiency, and Sarah who's disses him behind his back when she's not begging him to save her.
Posted by Deirdre at 2:17 PM No comments:

An online gallery of condiment packets.

But also soy sauces, salt & peppers, jams, and even extra virgin olive oil (under Misc 1).
Posted by cjereneta at 7:20 AM No comments: 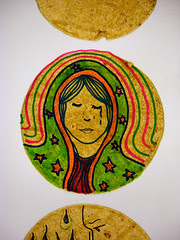 Crying Virgen
Originally uploaded by El Rio.
San Francisco artist Rio Yanez hosted "The Great Tortilla Conspiracy" at the De Young museum last week, inviting artists (and the general public) to come by and have their art silkscreened onto tortillas with edible inks. Link is to the photo set on Flickr.
Posted by Tim at 10:03 PM No comments:

Wang also collect YouTube videos of soul sides on the site here.
Posted by Tim at 6:37 AM No comments: 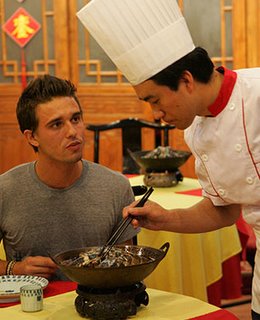 Well, we're back for another season. Just when our marriage was beginning to suffer a few awkward silences, along comes TAR to help us remember why we're so perfect for each other. It's so easy to scoff at the triathelete with the artificial limb about why she can't scale the wall faster, or to smirk as the Korean-American graduate student brothers can't quickly recreate a mosaic brick pattern. And I could definitely do that bok-choy-tai-chi way way faster than the cheerleaders. So we need to know Tom Carpenter's TAR link right away to share our vastly undeserved feelings of superiority. (PS: I think this is going to be a good season. I really want the coal miners to stay in it.)
Posted by Deirdre at 3:41 PM 1 comment:

Buying In or Selling Out?

I knew Unilver owned Ben & Jerry's. And I figured out from the "save this Box Top for your school" tag on my Cascadian Farms organic Honey Nut O's cereal that they were owned by General Mills. Didn't know General Mills also owns Muir Glen (tomatoes). I didn't know Coke owns Odwalla.

Maybe I shouldn’t have ever believed in a toothpaste or a shampoo or an ice cream. I now realize I didn’t really know that much about Tom or Anita or Ben, anyway. I don’t know yet whether L’Oréal is changing the Body Shop or vice versa, whether Tom is changing Colgate or being transformed. But I will now ask a lot more questions before I trust or believe in these companies again.

If there is one thing that makes me more uncomfortable than watching college kids do improv, it's watching twentysomethings do improv.

That being said, if you've got an editor, and you're attempting an improvised movie... about a high school speech and debate team... then, heck yeah, bring on the twentysomething improvisers! (They can pass for teenagers, and the milieu limits the wackiness factor and focuses them on character instead of laughs)

Annie Mebane and Lindsay Stidham, two of the women at ImprovOlympic West in Los Angeles put together a sweet mockumentary about a high school speech club over at iFilm. At 23 minutes, it's a little too long... and more character work than actual speeches... but I think they're aiming at shopping it around as a pilot.

The dual interp team is outstanding. Too bad we never get to see them dual interp.
Posted by Tim at 10:10 PM No comments:

Photographer Alessandro Tento has posted a stunning portfolio of photographs from China. Wow.
Posted by cjereneta at 11:38 PM 1 comment:

Dropping to #10 this week is "Gori Gori" from the Bollywood movie Main Hoon Na. The song that could do no wrong now drops below the live version of "Pay Me My Money Down" with Conan O'Brien and Jimmy Fallon at #9. The drop of one Shahrukh Khan clip pushes up "Ladki Bahi" to the #8 spot, with dozens of adorable moppets from Kuch Kuch Hota Hai keeping the Ro-ster enthralled.

At #7 this week is "Mahna Mahna" from season one of The Muppet Show.

#6 is a cover of "Victor Vito," a Laurie Berkner song, captured on home video for the YouTube crowd. You know a children's music songwriter is good when two year olds can sing the songs... and Ro-Ro picked up "Victor Vito" after two takes.

KFOG stalwart Jack Johnson holds steady at #5 with his seranade of Curious George, "Upside Down."

At the #4 spot is Laurie Berkner herself, with the Noggin version of "Victor Vito."

Leaping into the #3 spot this week is a throwback to the 90s with Tiny Toon Adventures' music video for They Might Be Giants' "Istanbul (not Constantinople)."

Laurie Berkner can do no wrong with the Ro-inator, claiming the #2 spot with singalong "Pig on Her Head."

(All videos available from the link)
Posted by Tim at 10:31 PM No comments:

Wired interview with Beck, who is pushing the boundaries of the "album"--releasing instead a mishmash of CDs, digital downloads, YouTube videos, and make-your-own-album-art--with stickers!

We did a remix project on a Web site a few years back where we put up the tracks to a song and let people make their own versions. There was something really inspiring about the variety and quality of the music that people gave back. In an ideal world, I'd find a way to let people truly interact with the records I put out – not just remix the songs, but maybe play them like a videogame.

Posted by cjereneta at 12:48 PM No comments: