Bagpipe and saw for the new year 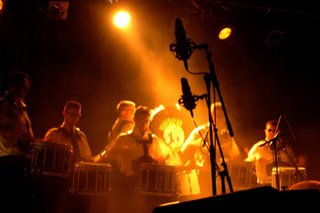 Folk Music & Beyond played one of those sets yesterday that made me want to just park the car and crank up the radio. Lots of hyper-energetic music for the New Year. Notable: Bagad Brieg, a pipe band from Brittany which blends Brazilian carnaval percussion and Taiko rhythms with traditional bagpipes. Fishtank Ensemble, featuring saw with gypsy music from eastern Europe. An insanely manic klezmer tune called "In Your Garden Twenty Fecund Fruit Trees", by Frank London's Klezmer Brass All-Stars. It all makes me want to rent a huge dance floor and get one of these bands to play some rockin' private dance party. Like, for when my husband turns 40. Just fr'instance.
Posted by Deirdre at 7:21 AM 1 comment:

"Maybe the Next One Will Be Good"

Part of the original addictive quality of MTV in the 1980s was that you had heard about a cool video, or had seen a cool one, and were willing to sit through a dozen or two mediocre ones in case a cool one came on.

So there might be fifty good ones in there.

Plenty of train wrecks. Mike and the Mechanics, Musical Youth, Rockwell, Quiet Riot. Quarterflash.
But oh... who even knew that videos existed for some of these '80s classics?
Like "One Night In Bangkok" by Murray Head, Afrika Baambaata's "Planet Rock," and the Weather Girls' "It's Raining Men."

Plus plenty of classics from Men at Work, Madonna, The Go-Gos, The Police.
Posted by Tim at 5:26 PM No comments:

The Tree of Life and Me

The Tree of Life project is an online database (funded by the National Science Foundation and the University of Arizona) which compiles information about biodiversity and the evolutionary relationships of all organisms. Both professional and amateurs can contribute to it... which makes some entries more accesible than others. It's nonprofit, intended to help scientists and teachers, but surprisingly middle and high school students are finding it a great resource.

I only stumbled across it while vanity Googling (to check on publicity for my Tell It on Tuesday gig this past week)... because their using some of my photos!

They are using my pictures of the slender salamanders I found living under our green waste bin on the side of our house last Spring.

The pictures have been on Flickr since March. I posted them under a Creative Commons license, spelling out that anyone could use them for noncommerical purposes as long as they credit me. Oh, and I suppose it helps that the labelled the photos with the Latin name for the genus, instead of just saying "salamander."

Side note: I was hoping to catch Taricha torosa, the California newt, with my camera this rainy season, since they are plentiful in Berkeley and Oakland, if you know where to look. Although Googling around the web I discovered that its skin is coated with an acute neurotoxin (Only harmful if ingested, or introduced via a mucus membrane (like the eye)... one pet site helpfully suggested: "Don't place any newt in your mouth")). Washing your hands is supposed to be enough of a precaution, but an adult California newt has enough tetrodotoxin to kill 2500-7500 mice!

on being the mother

“What are y’all reading?”

“One of her new Dora books.”

“The very exciting one in which Dora imagines all the different things she could be when she grows up, like a doctor or a scientist.”

“You mean she’s not hoping to grow up to be a blogger?”

“Not in this version, no. But the best part is Boots, the monkey who follows her everywhere, he wants to be a teacher when he gets older.”

“I imagine that Boots is going to be seriously pissed when he gets older and realizes that monkeys only get to grow up to be monkeys.”

“There is a reason I am the fun one and you’re the one whose name she always yells when taking a breath between screams.”
Posted by Deirdre at 3:01 PM 1 comment:

Clooney Is The New Khan

Here's a movie ticket I'm willing to buy.
Posted by Deirdre at 9:37 AM 1 comment:

From Dooce, a parenting blog worth the occasional visit:

I made all these points to my mother who continued to insist that organic free range chicken broth is a noble and valid product, and that is when I told her that I was going to write about this and emphasize the fact that she was taking up for the hippies.

And if you’ve ever wondered how it might be possible to melt the face off an Avon World Sales Leader, you might want to start by telling her that she’s taking sides with a group of people who don’t wear make-up.

Posted by Deirdre at 9:36 AM No comments: