Living near the shores of Lake Merritt, we learned that what looks on the horizon like an endless lush green lawn around the lake is really a stinky squishy carpet of goose poop.
Posted by Deirdre at 12:25 PM No comments: 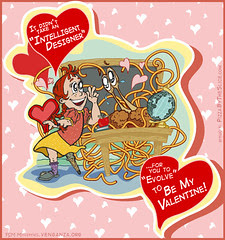 Which isn't surprising. They have a group for everything.

If you've never heard of the Flying Spaghetti Monster, click here first. (Another FSM Valentine available there, too!)

A glowing profile of George McGovern and a look back at his 1972 presidential campaign, in the new issue of American Conservative magazine (co-published by Pat Buchanan).
Posted by cjereneta at 5:29 PM No comments:

So I'm three years behind the times, but finally reached the original appearance of Trogdor in a Strongbad email at Homestarrunner.com, including a lo-fi early version of the Trogdor heavy metal anthem.

Look back now, then check out Trogdor's Third Birthday, a montage of fan tributes, including Trogdor-shaped pancakes, custom license plates, and weakass Halloween costumes set to the big and loud Trogdor anthem.
Posted by cjereneta at 12:54 PM No comments:

A-List Entertainer to the Children of Power Brokers

A: Wear a dirty diaper on your head.

A profile of The Great Zucchini. Read to the end for the more sordid aspects of Z's life.

[Note to spouse: honey... I think you were a little hasty to abandon the birthday party circuit. One bad dinosaur imitation does not make or break a career.]
Posted by Deirdre at 9:09 PM No comments:

Keeper of the Ashes

SF's Columbarium has over 65,000 people's remains and Emmitt Watson takes care of them all.
Posted by Deirdre at 9:37 AM No comments:

A collective blog of parenting advice from parents

Oh, and by "parents" they mean the iPod - MacLaren stroller - Getting Things Done - FlyLady - blog reader demographic.
Posted by Tim at 9:01 PM 1 comment:

Reminding me of why I loved David Foster Wallace's essay on English usage that appeared in Harper's some years ago, and that I need to get the new DFW book in which it is anthologized.

"A Democratic Spirit is one that combines rigor and humility, ie, passionate conviction plus a sedulous respect for the convictions of others. As any American knows, this is a difficult spirit to cultivate and maintain, particularly when it comes to issues that you feel strongly about. Equally tough is a DS's criterion of 100 per cent intellectual integrity -- you have to be willing to look honestly at yourself and your motives for believing what you believe, and to do so more or less continually."

Steven Simpson is a special education teacher up in Snoqualmie, Washington, who would have an excellent blog but for the fact that it's probably easier who him to keep doing what he has been doing since 1995-- sending out a weekly email (under the less than cozy name, "Ed.Net Briefs®")

Sometimes its on educational trends or experiments (check out how Golden Retrievers are improving literacy in
Reading to Dogs), or sometimes as in this heartrending essay, it's on the frustrations of being a teacher: We Can Imagine What We Cannot Do

The main link sends you to an entry on classroom management, with a technique he learned from his mother:

My mother has four children, six grandchildren, and a growing collection of great grandchildren. At 87 years old, she has raising kids boiled down to the two-step plan. She says if you feed a kid and stay in the same room with a kid, you can solve every problem there is.

Politicians Are From Mars, Judges Are From Jersey

If you’re following the Alito hearings, by now you probably know almost exactly as much about Samuel Alito as those who’ve been ignoring the hearings entirely.
Posted by Deirdre at 12:13 PM No comments:

by Linda Hirshman in The American Prospect

From our December issue: “Choice feminism” claims that staying home with the kids is just one more feminist option. Funny that most men rarely make the same “choice.” Exactly what kind of choice is that?

Posted by Deirdre at 1:27 PM No comments:

TBWA\Chiat\Day: Hey. We could do something kinda like this Postal Service music video.
Steve Jobs: Cool! I like that!

TCD: Ok, so we've gone and reshot this band's music video shot-for-shot like you asked. We even got the directing team who did it the first time. It still somehow seems like a bad idea.
SJ: You guys just don't get it. This ad is great.

Follow the link to see the side by side comparison.

[Update 1/18: Confirmation that the directors of the music video were, in fact, hired to "re-" direct the television commercial.
Posted by cjereneta at 11:17 AM No comments:

What A Piece of Work is Man

DarkSyde writes a great introduction to evolutionary biology in DailyKos, including some great graphics.

"Our school systems teach the children that they are nothing but glorified
apes who have evolutionized out of some primordial soup of mud,'' said House
Republican Majority Whip Tom DeLay, by way of explaining the school massacre
in Littleton, Colo.

Good grief, "evolutionized"? If the idea is self-adulation, I like Shakespeare's take better:

What a piece of work is man! How noble in reason! how infinite in
faculties! in form and moving, how express and admirable! in action how like an angel! in apprehension, how like a god! the beauty of the world! the paragon of animals!

Posted by Deirdre at 1:52 PM No comments:

No more for me, thanks.

The NYT review of the new season of "24" concludes:

"24" is a little like childbirth: by the end of each season, the process seems unbelievably long and painful, but once it is over, that is forgotten and most are ready to start all over again.

This got me wondering: It looks as if Ben is destined to be an only child, and after a season and a half of "24" I could not bear the stress of watching each week and gave it up. Are these somehow related?
Posted by Christa at 1:45 PM No comments:

Office cleaning strips away pretension. It’s tough to wear a false face when bent over a clogged toilet, working the plunger as shit water spills on our boots and pants. Or removing dried vomit from a carpet with a handheld steam cleaner. Nasty spills and messes keep us honest. There’s nothing conceptual about our work.

"Atoning at Night: A Janitor's Story," from Un Fils d'état rouge, the blog of writer Dennis Perrin.
Posted by Tim at 10:34 PM No comments:

McSweeney's Internet Tendency: The 4-Year-Old on a Blind Date.

The sequel to: The 4 year old's work day.

The hilarity factor increases when your own child, is, in fact, four years old.
Posted by Tim at 9:03 PM No comments:

What's that on your chair, Judge Alito?

Ministers Say They Blessed Seats Ahead of Alito Hearing

WASHINGTON -- Insisting that God "certainly needs to be involved" in the Supreme Court confirmation process, three Christian ministers today blessed the doors of the hearing room where Senate Judiciary Committee members will begin considering the nomination of Judge Samuel Alito on Monday.

Capitol Hill police barred them from entering the room to continue what they called a consecration service. But in a bit of one-upsmanship, the three announced that they had let themselves in a day earlier, touching holy oil to the seats where Judge Alito, the senators, witnesses, Senate staffers and the press will sit, and praying for each of the 13 committee members by name.
Posted by Christa at 9:46 PM No comments:

How I Spent My Christmas Vacation

The cover of the East Bay Express reads "GHOST TOWN: What if they built the development of the future and no one came?"

They're referring to Oakland's Fruitvale Village, of course.

But while they devote a lot of ink to the legitimate financial woes of the retailers who have moved in there, I found two key takeaways:

1. It's too early to sound a death knell on a smart growth project. (Although it would suck if the BART stations developing transit villages right now with private developer financing bailed on retail altogether).

I smell a Field trip!With coffee! And lots of powedered sugar! (And for us, it means a ride on a train. How can you beat that, kids? A train AND square donuts!)
Posted by Tim at 11:16 PM No comments:

This site was recommended by a guy who does earthquake safety consulting and was offering free consults to Berkeley Parents Network members.

It provides a stunningly clear, visual explanation of how retrofitting works to keep a house from falling off the foundation when 10,000 pounds of shear force hits it during an earthquake. I learned a lot, including that the despite fact that our house is bolted down, it still would probably slide off the foundation in an earthquake. It also explains very clearly what we could do to minimize that possibility.

Spend five minutes looking at this site, then check out your foundation.
Posted by Christa at 10:06 AM 1 comment:

Who Moved My Coal?

With all the parents of Thomas-crazed kids out there, don't you think there's a market for a management book based on the Island of Sodor archetypes and stories? (Recall "The Tao of Pooh.")

Example: In A Big Day for Thomas, Thomas gets his big chance to pull coaches rather than shunt freight cars after Henry gets sick. "Be quick now!" says Sir Topam Hat. "Don't be impatient, Thomas. We'll wait until everything is ready." says his Driver.

Thomas is faced with conflicting requirements from two different stakeholders. He is eager to please upper management and ignores the advice of his driver - the one who is clearly more in touch with the realities "in the field" - and sets off before the coaches are coupled. This results in a fiasco at the station and decreased customer satisfaction metrics.
Posted by Christa at 9:55 AM 1 comment:

An abandoned 1980s indoor mall in St. Louis is repurposed for an art show.
Posted by cjereneta at 10:48 PM No comments: