The boys and I were puttering in the backyard after dinner tonight, ostensibly working in the garden. ("How can we call it a garden when we haven't done any work on it since last year?" asked L)

R picked up one of the many bamboo poles and began to pose with it and thrust it about as a weapon against imaginary enemies. I heard him announcing his powers. I realized he was not showing off his finesse with a light saber, but what I did hear surprised me. "Did you say you're Shah Rukh Khan?"

"Yeah, dude, you're Sun WuKong!" shouted L, and went over to instruct R on the finer points of wielding Sun WuKong's cudgel.

In Chinese, Sun either means or implies "monkey," and WuKong is his Buddhist name, which means "aware of emptiness," or more precisely, ""the one who has Achieved the Perfect Comprehension of the Extinction of both Emptiness and non-Emptiness." 孫悟空, also known as the Monkey King, is the hero of the classical Chinese novel of the 16th century, Journey to the West.

I picked up several volumes of a 34-volume illustrated version of the novel at the Salvation Army. We've been reading them before bedtime this week. The illustrations are terrible-- turns out, this collection is likely the print adaptation of Shangai Animation Film Studio's 1960's animated series based on the novel. The books were released in English in the 1980s, about the time the animated series was released on video. 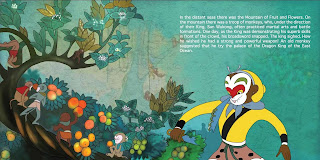 Monkey can fly (well, leap 54,000 kilometers in a single bound), transform himself, is on a mission (to escort the Tang Priest Xuanzang to the West to obtain Buddhist Scriptures), and beats the tar out of evil spirits and demons. In short, he's a superhero, albeit one that has a tail and take his marching orders from Kuan-Yin, the Goddess of Compassion. 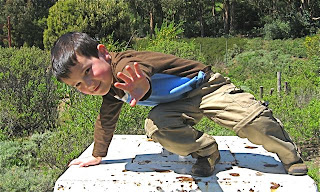 Sorry, Yoda. The Force is with Monkey.

Power Ranger or Chinese immortal?
Posted by Tim at 10:00 PM No comments:

NYTimes: Sugar is back. As a health food.

I used to distinguish on price.

Now, I'll scan the ingredient labels. If I see High Fructose Corn Syrup, I won't buy it. If the competing brand lists Sugar in its place, I'll buy that one. Hell, I'll even pay a premium. I believe I've paid up to a dollar more for a loaf of bread to avoid HFCS.

I'll pay extra for the perception that I'm getting a more "natural" product.

Good for sugar, I think. But then the article doesn't just cover this marketing trend-- adjustments by processed food and beverage manufacturers responding to consumer preference: it goes on to quote several scientists who point out that nutritionally-- there's no difference between HFCS and Sugar. An empty calorie is an empty calorie.

So much for my health.

Still, Coke tasted better in India. Like Mexico, they make their cola with sugar, not corn.

And I still get to feel righteous for sticking it to the tyranny of the corn states.
Posted by Tim at 9:48 PM No comments:

Two brilliant and provocative reads on the future of news (and the collapse of the newspaper business) burned through blogs and RSS readers this week. Both writers sit far enough outside of the industry to offer a clear perspective and to be ignored by anyone inside the industry with the power to change it. (Although you can be sure journalists themselves were emailing each other about both pieces all week.) Both pieces attempt to confront the paradox of ever-falling revenue and ever-increasing readership.

Clay Shirky presents the more harsh vision of the future, which he telegraphs in his title, "Newspapers and Thinking the Unthinkable."

He compares our current, electronic shift in information distribution to the invention of the printing press and italic type, and the massive cultural shifts those helped make possible. (Copernicus, anyone? The Protestant Reformation?)

There are fewer and fewer people who can convincingly tell such a lie.

Shirky doesn't claim to know what journalism will look like once the revolution is completed. He does believe that the future lies not in the hands of the newspaper publishers, but in the hands of the dozens (even hundreds, or thousands) of experimenters who are attempting wholly new ways of connecting people to information (and to each other).

Steven Johnson shortens the lens to look at his own past as a media consumer in a speech he delivered at the South by Southwest Interactive Festival in Austin entitled "Old Growth Media and the Future of News".

He describes days he spent in his youth checking the bookstore repeatedly for the arrival of each new issue of Macworld, a magazine he relied on for news that was weeks (if not months) out-of-date by the time he read it. He contrasts that time (just 20 years ago) with the overabundance of news and information he now has at his fingertips via the world wide web.

Johnson, the author of Everything Bad is Good for You: How Today's Popular Culture is Actually Making Us Smarter, is far more of an optimist than Shirky. He articulates a vision for the future of professional journalists and news organizations, and asserts that on the other side of the demise of the local paper will be an even greater awareness of the news in one's neighborhood.

I adore the City section of the New York Times, but every Sunday when I pick it up, there are only three or four stories in the whole section that I find interesting or relevant to my life – out of probably twenty stories total. And yet every week in my neighborhood there are easily twenty stories that I would be interested in reading: a mugging three blocks from my house; a new deli opening; a house sale; the baseball team at my kid’s school winning a big game. The New York Times can’t cover those things in a print paper not because of some journalistic failing on their part, but rather because the economics are all wrong: there are only a few thousand people potentially interested in those news events...

As we get better at organizing all that content – both by selecting the best of it, and by sorting it geographically – our standards about what constitutes good local coverage are going to improve. We’re going to go through the same evolution that I did from reading two-month-old news in MacWorld, to expecting an instantaneous liveblog of a keynote announcement. Five years from now, if someone gets mugged within a half mile of my house, and I don’t get an email alert about it within three hours, it will be a sign that something is broken.

Both posts are worth your time.

And, for a bit of additional fun, here's a feature that ran on KRON-TV in San Francisco in 1981(!) about the future of "electronic newspapers", delivered via modem to your home "computer".

YouTube link
Posted by cjereneta at 9:10 PM No comments:

A great deal of hip-hop and electronica artistry begins by digging in used record bins, searching for bits and pieces that can be digitized, chopped up, and reassembled into something new. A snare fill here, a bass line there. Snippets of guitar riffs, piano arpeggios, vocal backing tracks, etc.

There he found a treasure trove of audio: drummers, pianists, flautists, church organists, string quartets, guitar soloists, harmonica and bouzouki players, a capella singers and rap freestylists. Plus video after video of synthesizers, vocoders, and audio effects box tests, oscilloscopes and wave form generators, even the sounds of pressing buttons on mixing equipment he was able to put to use. He calls "ThruYou" the "1st movement", an apt choice given that this particular wellspring is so vast (and ever expanding).

I wasn't able to wrap my head (or heart) around the nerd remix smash hit of 2008, Girl Talk's "Feed the Animals". That madcap stirfry of the past few decades of rock, pop, and hip-hop (finely diced and shredded) seemed best enjoyed whilst reading the Wikipedia article that catalogued all of the samples to the second.

Here you quickly realize that Kutiman used video editing software to assemble his mashups, meaning that you can SEE his source material unfolding in front of you. (In his words, "What you see is what you hear.") For me, watching these dozens of random faces and hands, posted initially to YouTube by disparate strangers hoping to instruct, to perform, to show off, to practice, or to simply connect, now juxtaposed in rhythmic counterpoint in ways they could not have foreseen was surprisingly emotional.

It felt like one of the those moments where a technology-fueled future felt more (rather than less) human, and the possibilities for art and music and creativity opened wide.

Plus I liked the tunes. (My favorite is embedded above.)

See and hear them for yourself. Alternate link here, if the site is down.

(Via Andrew Sullivan.)
Posted by cjereneta at 12:36 AM No comments:

Steve Wozniak: Dancing with the Startups

Of course branding is no substitute for results, but what's notable about the Obama administration's efforts (in contrast to the Bush administration's) are that they 1) look crisply modern, and 2) don't come off as baldface lies.

The question of lying is not entirely a political assumption I am making; Bush routinely appeared in front of backdrops that made actual claims ("Helping Small Business", "Strengthening America's Economy", "Mission Accomplished"). Had there been a functioning Office of Legal Counsel under Bush they might have insisted on adding an asterisk to each of these "logos".

Of course over the coming years we'll see if the product actually matches the implied brand promise...

(Via Communicatrix, @gruber, et al.)
Posted by cjereneta at 11:24 AM No comments:

The Crisis of Credit Visualized


The Crisis of Credit Visualized from Jonathan Jarvis on Vimeo.
Posted by Tim at 9:54 PM No comments: