The Scared of Santa Holiday Gallery 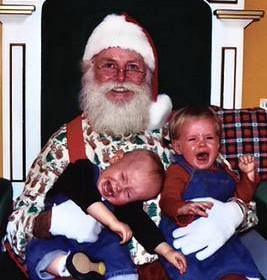 The 'Scared of Santa' gallery is worth studying as you plan your visuals for next year's holiday card. I shouldn't be so amused by freaked-out kids, but... Also worth a careful examination of the morphing facial expressions of Santa. ("Mommy? How can he be all over the world with these kids all at the same time? And how come he looks drunk?")
Posted by Deirdre at 12:16 PM 1 comment:

Op-Ed from Laurie David, one of the producers of An Inconvenient Truth.

She offered 50,000 free copies of the DVD of the movie to the National Science Teachers Association, to distribute to science teachers. NSTA declined, noting that accepting such a gift would put an "unnecessary risk upon the capital campaign, especially targeted supporters."

NSTA responds here. Seems like their Executive Director is experienced in damage control. Not only does he address Ms. David's accusations of corporate influence, he agrees to help get the DVD out to teachers.
Posted by Tim at 9:38 AM No comments:

A brilliant montage of dozens of movie clips featuring the legendary "Wilhelm scream", a sound effect recorded at Warner Brothers in 1951 that has evolved from sound-design workhorse to industry in-joke.

I'd read about this in the past, but had no audio or visuals to place it in context.

[Via Boing Boing]
Posted by cjereneta at 9:04 AM No comments:

I've been working at Cal long enough that I don't even notice how much University culture I've absorbed. I read daily briefings on Nobel prize winners, MacArthur geniuses, over the top under the table compensation to administrators, et cetera. It was probably 2002 that I was first introduced to the legend of "the play."

I missed most of the nuances of the play, blah blah blah fourth quarter blah blah Cal needs a miracle blah blah Stanford is winning, the game is about to end, and Cal gets the ball with just seconds left on the clock.

the Stanford band enters the end zone and marches onto the field. The receiver runs the ball through the marching band into the end zone for a touchdown (and knocking down a trombone player in the process).

Tonight, I wondered if YouTube might have a clip of a Cal game, any Cal game, to show Liam (whose fondness for all Cal sports continues unabated). And sure enough, we find:

Even if you don't like football, listen to the announcer (Cal's Joe Starkey) shout his way through this.

For more context, which actually makes the Play even more exciting, when you see what leads up to it: The last five minutes of the Cal-Stanford game, 1982.

I could have sworn I saw this exact play with Spanky McFarland and Alfalfa in a "Little Rascals" short back in the day.
I wonder if I could find that Little Rascals short on the internets.

Thank you, internets.
Posted by Tim at 11:35 PM No comments:

The Dinner Table as a musical instrument

Beck and his band tear it up with forks and spoons in a live performance on SNL.

Complete with cutaways to a band of marionette dopplegangers.

Posted by cjereneta at 8:10 PM No comments:

Best ones: Jacobus's Video Blog from the 14th Century.
Posted by Tim at 11:30 PM No comments: