So Lawrence Hall of Science conducted a survey of Bay Area School Districts to check in on the state of science education at the elementary school level.

The findings: 80% of K-5 teachers reported spending one hour or less each week on science.

Link to the study.


Link to the YouTube video (which is an executive summary given by adorable moppets... who, while surrounded by "science-y" gadgets (pretty much NONE of which you'd see in any elementary school classroom whether it was science intensive or not), almost but don't quite match the actual demographics of elementary schoolchildren in the nine Bay Area counties.)
Posted by Tim at 8:29 PM No comments:

Same As It Ever Was?

Recently I read a profile of David Byrne from 1993 which went into some detail on the televangelists that inspired Byrne to write the song "Once in a Lifetime," which became a hit single for the Talking Heads in 1980. In the article, Byrne also noted how much the gestures of these evangelical preachers informed the choreography he and Toni Basil created for performances of the song in both the original music video and the live concerts of the Talking Heads.

Thanks to YouTube, and especially the Wembley Stadium clip (which intercuts actual footage of these preachers), you can see exactly what Byrne and biographer John Howell are talking about.

But I only bring this up because I happened upon a very different YouTube video tonight.
Kermit the Frog:
Covering "Once in a Lifetime," Muppets Tonight, 1996 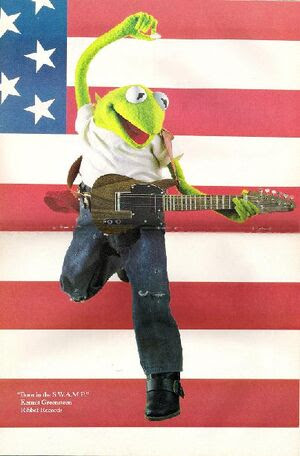 Now I've always found the Muppet photo parodies (of album covers, of Calvin Klein ads, of famous paintings) spot on... not just clever, but powerful, iconic even. This re-creation of Springsteen's Born in the USA doesn't quite have the power of the original, but substituting Kermit for Bruce comments on the cult of celebrity, the power of image, and the ouroborous-like ability of pop culture to swallow itself.

Sadly, however, this power doesn't translate to video.

This may be a function of the Muppets Tonight writing staff in 1996 inability to see this sketch as anything but a parody of Stop Making Sense. (An odd target in 1996 considering that the Talking Heads had broken up 5 years before... Byrne had 4 solo albums out by this time...) Certainly, the image of Byrne dancing and singing in the oversized suit was an indelible image in the landscape of musical performance.... but as you can see in this clip... NONE of the stage presence that Byrne brings to the song translates to Kermit. This clip apes the form (not the content) of the Stop Making Sense clip, but not very well. There's not even a Muppet take on the song.

Okay, I stacked the deck. Gave you three Byrne clips first. Maybe in 1996, without having seen Byrne recently, the clip would have been hilarious.

But if the first season of The Muppet Show and the first three movies showed us anything, it was that as much as the Muppets depended on an immersion in pop culture, they rarely needed to resort to parody.

Counterexamples welcomed. My memory is selective.

1. Mashup of Talking Heads' "Once in a Lifetime" with bizarre conceptual video from The Ernie Kovacs show
2. The Smashing Pumpkins cover, done as a heavy metal dirge/drone
3. Tornoofo17's surprisingly watchable music video of his friends dressing up and lip-synching to this song.
4. Acoustic emo version by Scott Stevens of the Exies
5. Performance in a warehouse by experimental band Invisible, with a conceptual twist: a performer typing out the lyrics on an electric typewriter, not only to provide the lead singer the words, but as the typewriter is hooked to a piano, adding an original countermelody.
6. Music video by Cienfuegos, an Argentinian rock band, doing a cover, c. 1998
Posted by Tim at 10:43 PM No comments:

I love this video from the Onion News Network, a reminder why television news prefers to run wall-to-wall coverage of missing white girls.
Posted by cjereneta at 3:51 PM No comments: