View from the Aboveground BART

Nature writer Chris Clarke posts where it emerges from underground Berkeley to head into Albany and El Cerrito.

A whoosh of engine and a scrape of wheel on rail, and we are gone and the residents enjoy their yards in peace. I have been riding this line, though, for a quarter century, and a quarter century of daily four-second glimpses adds up. My time riding this train has been a reel of film, each pass by each yard a still frame.

Worth the two minute read.
Posted by Tim at 11:40 AM No comments:

A Locavore's Meat of the Month Club

Over at The Ethicurean, Bonnie Powell announces the start of a new Community Supported Agriculture program that features sustainably grown meat.

The backstory is amazing, which bring to light many of the logistical difficulties of attempting a "cow share," or any kind of subscription program that involves large meat animals (as well as remind the average grocery store buyer that they really don't know where meat comes from). Where do you find a slaughterhouse? How do you divide up beef ribs into 40 subscriptions? (Here's her 2006 post on what to do with an order of 660 pounds of beef and lamb.) Who gets the hog skin? But... it's fascinating to see that the 75 member Bay Area Meat CSA not only has a waiting list, but an email subscriber base of more than 500 people!

New CSA starting in Tomales, based at Clark Summit Farm. You can sign up now, but hurry, they have to cap these subscriptions. Details at Bonnie's post, plus links to other local Meat CSAs.
Posted by Tim at 6:18 AM No comments:

Video (15 mins.) of Clay Shirky's talk at last week's Web 2.0 Conference in San Francisco. I'll add to the chorus of bloggers suggesting that it's worth hearing.

Or, if you don't have fifteen minutes, you can read a "lightly edited" transcript on Shirky's blog. At one point he recounts talking to a television producer about a particular Wikipedia dustup.

She heard this story and she shook her head and said, "Where do people find the time?" That was her question. And I just kind of snapped. And I said, "No one who works in TV gets to ask that question. You know where the time comes from. It comes from the cognitive surplus you've been masking for 50 years."

Posted by cjereneta at 9:24 PM No comments:

Brief documentary by filmmaker Chuck Kraemer about John Kristensen and Firefly Press in Someset, MA. Shot and paced like a classic CBS Sunday Morning segment. And I mean that in all the best ways.

Posted by cjereneta at 12:49 PM No comments:

The Oakland Tribune finally fills in a few details on the fatal car crash that happened at the foot of our street last December, with a feature on what some of our neighbors call "crash curve".

The young radiology student's car missed hitting [Sue] Yascolt's house by about 20 feet.
But if he had struck her home, he wouldn't have been the first. Yascolt's home has been hit five times by vehicles.

They installed a new metal guardrail last week, which does help reduce the anxiety we feel when walking to the playground. A bit.

Link
Posted by cjereneta at 5:28 PM No comments:

I would ideally like my posts to Blognabbit to point to sites, videos, and ideas on the internets that are worth the expenditure of your scarce and precious time.

There are things on the internet, however, that are best reserved for times that are, shall we say, less precious. The Chili Cheese Fritos moments, if you will. Those, it would seem to me, would be best captured (and shared, if anyone were actually following along) with something like Tumblr.

On a Tumblelog I wouldn't need to write an entire blog post to justify why I would choose to embed this Gerardo video:

or this Korean television commercial:

And I wouldn't also feel the need to apologize to my three co-contributors quite so often...
Posted by cjereneta at 1:17 PM No comments:

Chicago designer Jenny Beorkrem at Ork Posters creates boldly graphic maps breaking cities up into their component neighborhoods using only boundary lines and all-caps typography (DIN 1451, for those who care about these kinds of things). Each map is available in either poster or screen print editions, in a variety of colors.

Right now the choices are limited to Boston, Brooklyn, Chicago, Manhattan, and San Francisco, but apparently Beorkrem's initial run was successful enough that she's quit her day job to focus on this full time.

Of course in musing about what an Ork-style Oakland might look like, I found this map (commissioned by the city in 1982) that the Oakland Museum uses to catalog its collection.

Via Brooklyn Based.
Posted by cjereneta at 8:27 AM No comments:

I had a dream that A Prairie Home Companion to Oakland, and began the show with a novelty number celebrating various names of local landmarks, including a weak rhyme of "Alameda".

Apparently such a song actually exists, having been written and recorded in 1963. Had I been alive in the Bay Area at that time, or were I a current patron of The Alley on Grand Avenue (where the song is sung by Rod Dibble at the piano bar most every Tuesday through Saturday) I would have already known about the city's official* theme song, "Oakland", by The Goodtime Washboard Three.

The song's brief but colorful history was featured in a writeup in Oakland Magazine last March. And there is an MP3 available for download from the Oakland Public Library.

Of course if your tastes run more towards E-40 or Keak da Sneak than Garrison Keillor, this probably isn't for you.

(Via the useful local information source wrapped in a visual nightmare that is 94611.net.)

*The only citation of the song's status as the city's "official" song comes from the band's washboard player Wayne Pope, who asserts that Mayor John Houlihan made the pronouncement shortly before his indictment, conviction, and jail term for embezzlement.
Posted by cjereneta at 11:41 AM No comments:

An unforgettable--really, I mean UNFORGETTABLE--clip out of India. But not from Bollywood or Tollywood, but Kollywood--the modestly-sized Tamil-language movie industry centered in Kodambakkam, Chennai.

The film is called Ella Inba Mayam, and--despite the terrible quality of the print--dates to 1981. The movie, according to comments found here, is intended as a Peter Sellers-style comedic romp, but I'd call the star (Kamal Haasan) more of a Tamil Mike Myers, at least from what I can see here.

Popular Movie Trailer to be Adapted into Full-Length Film

Via the Onion News Network, increasingly my preferred source for all my fake news needs.


Link
Posted by cjereneta at 12:04 PM No comments:

In this 4 minute video from TED2007, motion graphics artist Jakob Trollbäck plays with the literary conceit of having a song "direct" its own music video, in this case David Byrne and Brian Eno's "Moonlight in Glory".

I remain unconvinced this would work for Celene Dion or Toby Keith...

Link to YouTube version, minus the TED intro and its advertising.
Posted by cjereneta at 10:03 AM No comments:

Our trip to the Exploratorium (AKA the Headache Museum) yesterday made me want to post this two-minute commercial from 1972 for a DIY Rube Goldberg machine kit for kids. They don't make toys (or ads) like this any more.

The electronic music by Jean-Jacques Perrey is also, as the kids are saying these days, full of win.

Via Jesse Thorn, via Boing Boing

Link
Posted by cjereneta at 8:43 AM No comments:

You would be correct in asserting that it does not get much better than Stevie Wonder's "Superstition."

Unless there were to be some sort of seven minute extended jam performance of the song by Wonder and his band captured live on video circa 1972, with all the fashions and hairstyles that would imply.

And/or unless this performance were to have been ON SESAME STREET.

Because it is difficult to imagine that something so awesome might actually exist.

It is only too bad that the director kept cutting away from the kid at the top of the stairs.

Link
Posted by cjereneta at 8:48 AM No comments:

Heartbreaking. Funny. Violent. Schulz at the top of his form.
Link
Posted by cjereneta at 11:10 PM No comments:

A vocal minority of Flickr users felt that the intrusion of video somehow violated the sanctity of their photos, and have begun posting a variety of images in apparent protest of this new (wholly optional) feature.

Designer Mike Monteiro mocked the mounting hysteria with his own poorly typeset text banner calling for the elimination of photos on Flickr.

But it's the comment thread (128 replies at last count) that now accompanies this image that's worth a lookthrough, a collective and increasingly surreal riff on internet commenting culture, complete with animated unicorn GIFs.

I compare the thread to that moment in The Simpsons "Homerpalooza" when one teen turns to the other and says "Are you being sarcastic, dude?" and he responds "I don't even know any more."

With more than 100 followup responses to that.

Link
Posted by cjereneta at 10:23 AM No comments: 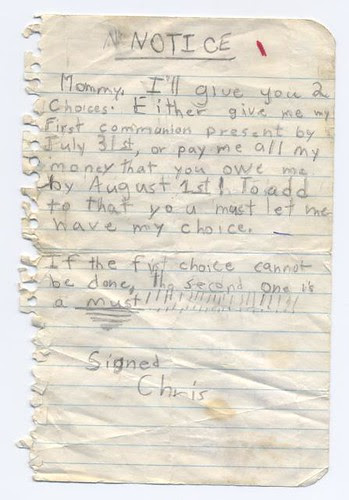 Mommy. I'll give you 2 Choices. Either give me my First communion present by July 31st, or pay me all my money that you owe me by August 1st! To add to that you must let me have my choice.

Oakland Goods found this feature in the NYT archives from May 7, 1906. It describes San Francisco's gentle mockery of Oakland by comparing it to New Yorkers' attitude towards Brooklyn.

Then suddenly, in the wake of the great earthquake and fire, Oakland was thrust into the spotlight as a base of operations for aid and relief efforts.

Human nature is the same in most parts of the world, and the inhabitants of Oakland have been tempted sorely to profit by the catastrophe in the big city that so often sneered at them. But as a rule they have acted marvelously well....These cheerful, warm-hearted, careless, rather lazy people of the Pacific Coast have proved themselves in this emergency "pure gold."

I wonder if a modern newspaper could stave off bankruptcy by adopting an old-timey copywriting style. I'd be willing to pay to have a paper like that delivered to my door.

Via Gary Butcher at 30gms, an early 80s making-of featurette showing the old-school model building and special effects used to create a signature HBO intro sequence. It's perhaps a bit long at 10 minutes, but the soundtrack is outstanding, and features one of the only songs I know of that truly celebrates the magic of the special effect artist.

Music composed by Jonathan L. Segal, who remains available to jazz up your event.

Posted by cjereneta at 8:58 AM No comments:

In a blog entry from last week, Dick Cavett gives tips to Obama, Clinton, and McCain on comedy, public speaking, and image.

While Cavett himself provides concrete advice interspersed with some comic zingers, the comments posted by readers are fascinating.

In between the fawning admiration for Cavett, there's a wide response to the speaking styles of all the candidates, additional tips and tricks for public speaking, and several challenges to the notion that competence in public speaking is any indication of fitness for the job of POTUS.
Posted by Tim at 10:58 PM No comments:

The Campbell Reporter/Los Gatos Weekly dropped in on my first grade teacher on the occasion of her one hundred and second birthday.
Posted by Tim at 9:30 PM No comments: