Welcome to Our New Readers

(This entry will stick on top until Jan. 1)

If you're just peeking at Blognabbit for the first time, welcome!

Bookmark this site. Come back often, or, if you're a technological adept of the the 21st century, add us to your RSS aggregator. Here you can keep up to date with Chris, Christa, Tim, Deirdre and offspring as they get in shape for various feats of athletic endurance, wrestle their professional demons, and travel to far off locales.

Actually, none of that shows up here. Mostly you just get to peek at our links du jour.

<how about we add a end-of-the-year holiday report here?>

We thought about adding a FAQ here, but no one ever asks us any questions about this blog. So feel free to ask questions via the comment section, and then check back soon for answers.
Posted by Tim at 3:33 PM No comments:

A list of stories of a few steps forward from around the US. Civil rights, labor rights, the environment and more.

Posted by cjereneta at 2:13 PM No comments:

Liam and Ronan each received a plastic prism for the holidays, the kind where you hold it up to your eye and you see multiple images of whatever you pointed at. Turns out, it works with a digital camera, too. 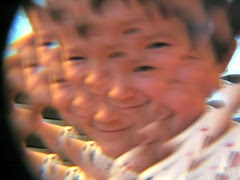 I Wanna Love You Tender

It's that time of year when I start craving top ten lists. Or best of lists. Of any category. I've already read the NYTimes film critic lists. They failed to satisfy.

Would anyone care to offer anything?
Posted by Deirdre at 1:09 PM 3 comments:

The New York Times is surprisingly quick at picking up this story, about the internet success of new SNL cast member Adam Sandberg, who got his job at SNL after being an internet success.

Complete with geeky picture of the Lonely Island boys.
Posted by cjereneta at 3:46 PM 2 comments:

Joe Queenan's NYT essay on the dangers of lent and gifted books.

Several years ago, I calculated how many books I could read if I lived to my actuarially expected age. The answer was 2,138.... In principle, there would be enough time to read 500 masterpieces, 500 minor classics, 500 overlooked works of genius, 500 oddities and 138 examples of high-class trash. Nowhere in this utopian future would there be time for [Steve Allen's] "Hi-Ho, Steverino!"

BARBIE, that plastic icon of girlhood fantasy play, is routinely tortured by children, research has found. The methods of mutilation are varied and creative, ranging from scalping to decapitation, burning, breaking and even microwaving.

I wonder whether these researchers would point to Christa's practice of giving her Barbies custom "Dorothy Hamill" haircuts.
Posted by cjereneta at 11:50 AM 2 comments:

Cranky Bugs: The One Boy Show

The boy has started doing a dramatic interp version of the Thomas the Tank story "Cranky Bugs." He practices constantly: in the car or just walking around the house.

This is the original text:

Thomas and Percy love working at the docks. They enjoy the sea air and the sound of the gulls. But today the friends are hot and bothered. A crane is causing trouble. His name is Cranky and this is his first day at the docks.


And this is his interpretation:


He's also currently working on a version of "Salty's Secret."
Posted by Christa at 8:56 AM 2 comments:

Charlie Pierce of Wait, Wait, Don't Tell Me writes an article in Esquire on Idiot America-- our national culture of trusting our gut instinct and being suspicious of learning, fact, and reason.

...the rise of Idiot America today represents -- for profit mainly, but also, and more cynically, for political advantage and in the pursuit of power -- the breakdown of a consensus that the pursuit of knowledge is a good. It also represents the ascendancy of the notion that the people whom we should trust the least are the people who best know what they're talking about.

Pierce explains why intellectually dubious enterprises, such as intelligent design, the invasion of Iraq, and the Federal Government's response to Hurricane Katrina, are shrugged off if and when they are seen to be mistakes. We're now a nation with a collective gut, instead of a collective mind.
Posted by Tim at 7:59 PM No comments:

Angela Shelton's Survivor Manual: what videoblogging was created for

Angela Shelton is a filmmaker and a survivor of abuse. Her film, Searching for Angela Shelton that chronicled the survival story of herself and 47 others women was lauded at multiple film festivals and was featured on CBS' 48 Hours and Oprah.

Haven't seen the film, but I discovered her brand new videoblog, in which she is documenting her ongoing healing process.

Shelton is an onscreen natural, and the camera work and editing are crisp. It helps that she is aided by an actual *crew*, so she's freed up to be the main character/host.

But even in moments when a piece feels like a moment from a reality TV show, it feels more appropriate to the videoblogging medium (short, serial episodes).

And while I subscribe to several videoblogs, most are mundane moments or random visual or auditory bits done in a style that makes me want to see what the person comes up with next.

But here's a use of the medium that makes me want to subscribe to find out what *happens* next. Where's Shelton's story going from here?
Posted by cjereneta at 2:20 PM No comments:

The NYT does videoblogging. Again.
This time in the Television section of the paper.
(Previously it was featured in Technology)
Posted by cjereneta at 10:05 PM No comments:

This morning, Buster meets two "old timey" secret agents, who fiddle, square dance, clog, and apparently need the latest Spy Kids gear to do it. Liam is spellbound.
Posted by Tim at 7:19 AM No comments:

Jon Carroll: On living in a bubble

"Is it any wonder real estate prices are so high? People want to leave, but they can't. Out There, people smoke in restaurants! OK, I'll pay a million-five for that hovel; just don't make me eat at a Denny's in Houston."
Posted by cjereneta at 4:59 PM No comments:

"Just a goddamned piece of paper"

From the world of alternative capitol hill reporting, this charming report of a president...a tad ambivalent about his oath to uphold and defend the Constitution of the United States.
Posted by cjereneta at 2:30 PM No comments:

It never happened. Nothing ever happened. Even while it was happening it wasn't happening. It didn't matter. It was of no interest. The crimes of the United States have been systematic, constant, vicious, remorseless, but very few people have actually talked about them. You have to hand it to America. It has exercised a quite clinical manipulation of power worldwide while masquerading as a force for universal good. It's a brilliant, even witty, highly successful act of hypnosis.

It's a scintillating stratagem. Language is actually employed to keep thought at bay. The words 'the American people' provide a truly voluptuous cushion of reassurance. You don't need to think. Just lie back on the cushion. The cushion may be suffocating your intelligence and your critical faculties but it's very comfortable. This does not apply of course to the 40 million people living below the poverty line and the 2 million men and women imprisoned in the vast gulag of prisons, which extends across the US.
Posted by Deirdre at 1:31 PM No comments:

I've never seen San Francisco dance company Project Bandaloop live, but I still think their dance is fabulous. Maybe it's that they dance on location.

Well, more specifically, it's that their locations are three stories, or seven stories, or ten stories in the air. On the side of a building. Dangling from the Space Needle. You know, just to play with our conventional notions of "up" and "down."

Of course, dancing in Yosemite is breathtaking, too, and not just for the scenery. It might have something to do with the two thousand vertical feet of air between the dancers and valley floor.

Lowbrow and small time, underachieving and unpopular, Funyuns are the Roger Clinton of the Frito-Lay family.

An Op-ed in the NYT on HarperCollins' decision to digitally remove the cigarette from Clement Hurd's photograph in the latest edition of GOODNIGHT MOON.

A fire blazing in the fireplace while Bunny sleeps? Suggested change: Get rid of it. At the very least, digitally add a fire extinguisher to the wall. And hello? Where are the smoke detectors?

Posted by cjereneta at 10:08 AM No comments:

To answer your occasional questions about what do I do all day: here's my latest web page. I get to create these occasionally for my work. Sorry about the Jurassic federal government style. (Imagine: using 'federal government' and 'style' in the same sentence. A first!)
Posted by Deirdre at 8:50 AM No comments:

So what is this staging, the staging that adds the bucks to the bottom line? One word: throws. There are bloody throws everywhere. There must be huge throw warehouse somewhere; truckloads must disappear into the real estate universe every week.

No books are permitted in a staged house, except tasteful coffee-table volumes on Impressionist painters or architects of the early 20th century. And the books are rarely placed on a bookshelf. In the house across the street, one set was put on an ottoman -- and then partially covered with a throw.
Posted by Christa at 11:20 AM 1 comment:

Christa and I were just talking about this today, before I came across this. Although I was unaware of the pro-retail angle.
Posted by cjereneta at 3:33 PM No comments:

A photo exhibition of urban population density. Most buildings photographed without any sky or ground visible.
Posted by cjereneta at 3:31 PM No comments:

Most confusing AP headline of the day...

So what does the runner up get?
Posted by Christa at 2:43 PM 1 comment: